Brought to you by Standard Bank Standard Bank Group added over one million customers in 2021, with 858 000 of the 1.16 million coming from its home market, South Africa.

The growth in South Africa was 9% year-on-year, which it says is comfortably in line with its stated targets by the end of 2025. Digital active clients are up 22%, more than twice the growth rate of the overall client base in the country.

The banking group reported an overall 8% increase in customers to 16 million in its latest results for the full-year ended December 31, 2021, on Friday.

It says the growth on the consumer side of the business “emanated from investment in up-skilling of client-facing bankers which improved the acquisition capability”.

“Furthermore, growth was also on the back of competitive solutions such as Flexi-Funeral, the fastest growing funeral plan in the market in comparison to peer banks.”

The banking giant highlights that digital adoption increased by 22% in the year, mainly via the bank’s mobile app (engagements through its cellphone banking platform grew by 40%).

More than eight in 10 of its new-to-bank clients (85%) were digitally registered.

Its business and commercial client base grew by 5% to 761 000 active customers.

Group CEO Sim Tshabalala told journalists on Friday that “that momentum, in 2021, we are expecting to continue into 2022”, certainly based on the high frequency data the bank’s executives have had sight of in January and February.

“We think that the South African consumer is actually pretty healthy, if you identify the correct segments. As far as corporates go, also very, very healthy and our pipelines are pretty good,” added Tshabalala.

“We are potentially on the threshold of an investment boom.”

Lungisa Fuzile, CEO of Standard Bank South Africa, says: “The one thing that is not in doubt is that President Ramaphosa’s government is executing on its reform agenda.”

Fuzile, who was director-general at National Treasury before joining Africa’s biggest bank, notes that this was orchestrated by the former minister of finance Tito Mboweni.

While the “execution of it is moving in the right direction”, says Fuzile, he admits that the speed of it “changes from time to time”. 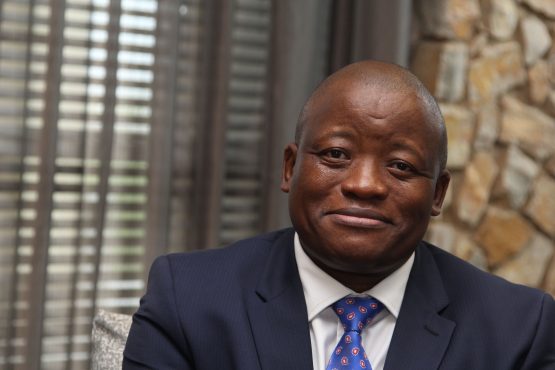 But he says what we have begun to witness is a “multi-pronged strategy” where government has acknowledged that it “can find solutions outside of Eskom”. The lifting of the threshold of embedded generation to 100MW is a clear example.

Read:
Is this Ramaphosa’s most decisive economic decision since taking office?
Companies can produce up to 100MW of power

“There is pent up demand,” he says. “People cannot wait for the next [bidding] round for renewables – the appetite has been overwhelming. And the bank has a history of supporting these entities.”

Solving the energy problem will solve “one of the massive structural constraints to growth in the South African economy”, says Fuzile.

He also notes the work to cut red tape under new appointee to the presidency, Sipho Nkosi, as well as the spectrum auction, with the president’s deadline of March. “When that happens – there is no ‘if’ now – it will move very quickly to have a positive impact on the economy.”

“All of these reforms, when executed, will contribute towards lifting the long-term growth trajectory of the South African economy.”

He admits that while some of these reforms have already happened, some are yet to happen, while some will be delayed.

Standard Bank Group posted an 18% increase in net income before expenses (which was up 25% in constant currency terms), mostly boosted by a sharp decrease ( down 52%) in impairments.

It reported a 57% increase in headline earnings to R25 billion, with this still trailing 2019 levels somewhat. Pre-provision profits (R47.8 billion) are closer (2019: R48.1 billion). Return on equity was 13.5% for the year, and this will trend back towards the higher teens as the impact of the pandemic fades.

The group says: “South Africa’s economic rebound is expected to continue, albeit at a slower rate [SBG Research forecasts 2022 real GDP growth to be 2%] as policy stimulus fades and terms of trade retreat from the recent record highs.”

The group notes the year has “started with strong business momentum” and that it is confident it is on track to deliver against the 2025 targets laid out at its Strategic Update in August last year.

The focus this year “will be on integration” between the banking group and Liberty.

Former Liberty CEO David Munro (seconded from Standard Bank) has been appointed to head this integration. The bank says it has “a plan and will be executing against it with urgency”. Together, it says, “Liberty and Standard Bank represent a formidable competitor on the continent”. Click here for a pdf version of the results announcement.

You must be signed in and an Insider Gold subscriber to comment.

You can cancel at any time.